‘Of old time, on the banks of the River of Thames, near to this church, garlick was usually sold.’ 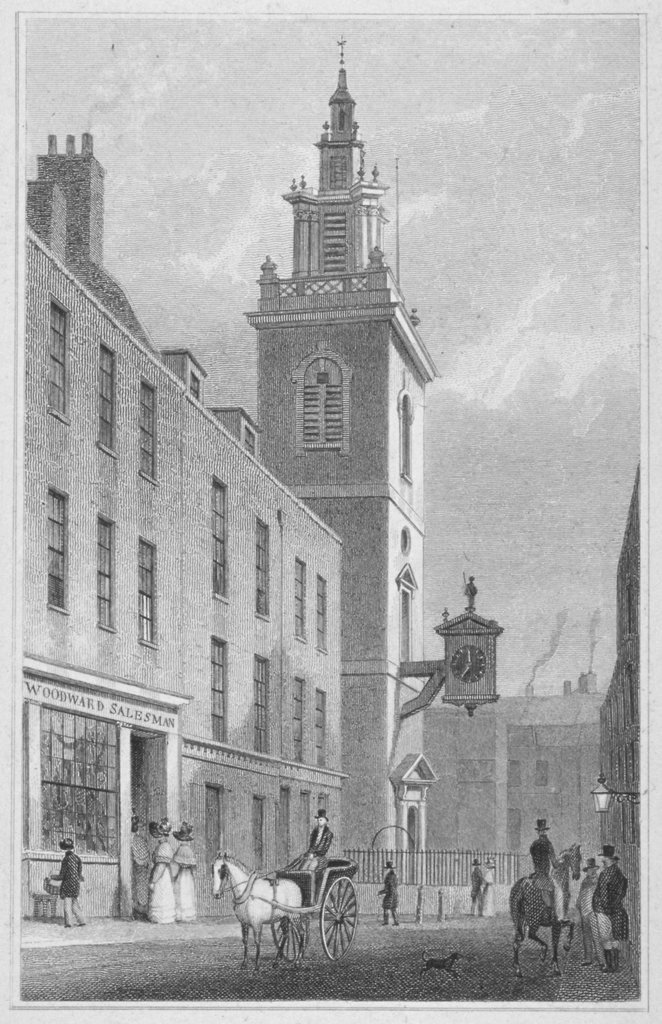 A Georgian view of the church looking down Garlick Hill

Like so many of our City churches, the history of St James is one of survival through war, fire, drought, disease and misfortune.

It’s thought a church has stood on Garlick Hill since Anglo-Saxon times. It is first mentioned as the 'ecclesia Sancti Jacobi' in a will dated between 1096 and 1115. The first known Rector was Peter del Gannok in 1259.

It was rebuilt in the fourteenth century by Richard de Rothing and his son John, both Vintners. The medieval church was considerably smaller than the current building, and there is a record of an adjoining cloister on the site.

This may well have existed for a religious guild for men and women which was founded in 1375. By the following century, St James had become a collegiate church with a number of chantry chapels served by priests who were provided with quarters, which came to be known as 'St James Commons'.

Six Lord Mayors were buried in the mediæval church, a sign of its importance. They are now commemorated by plaques on the north wall.

In 1538, Henry VIII ordered churches to keep a register of births, deaths and marriages. Those at St James Garlickhythe are the oldest in England, the first entry being the Baptism of one Edward Butler on 18th November 1535. William Boyce the composer was baptised here on 11th September 1711.

The ancient registers and other City records can be seen in the Guildhall Library. 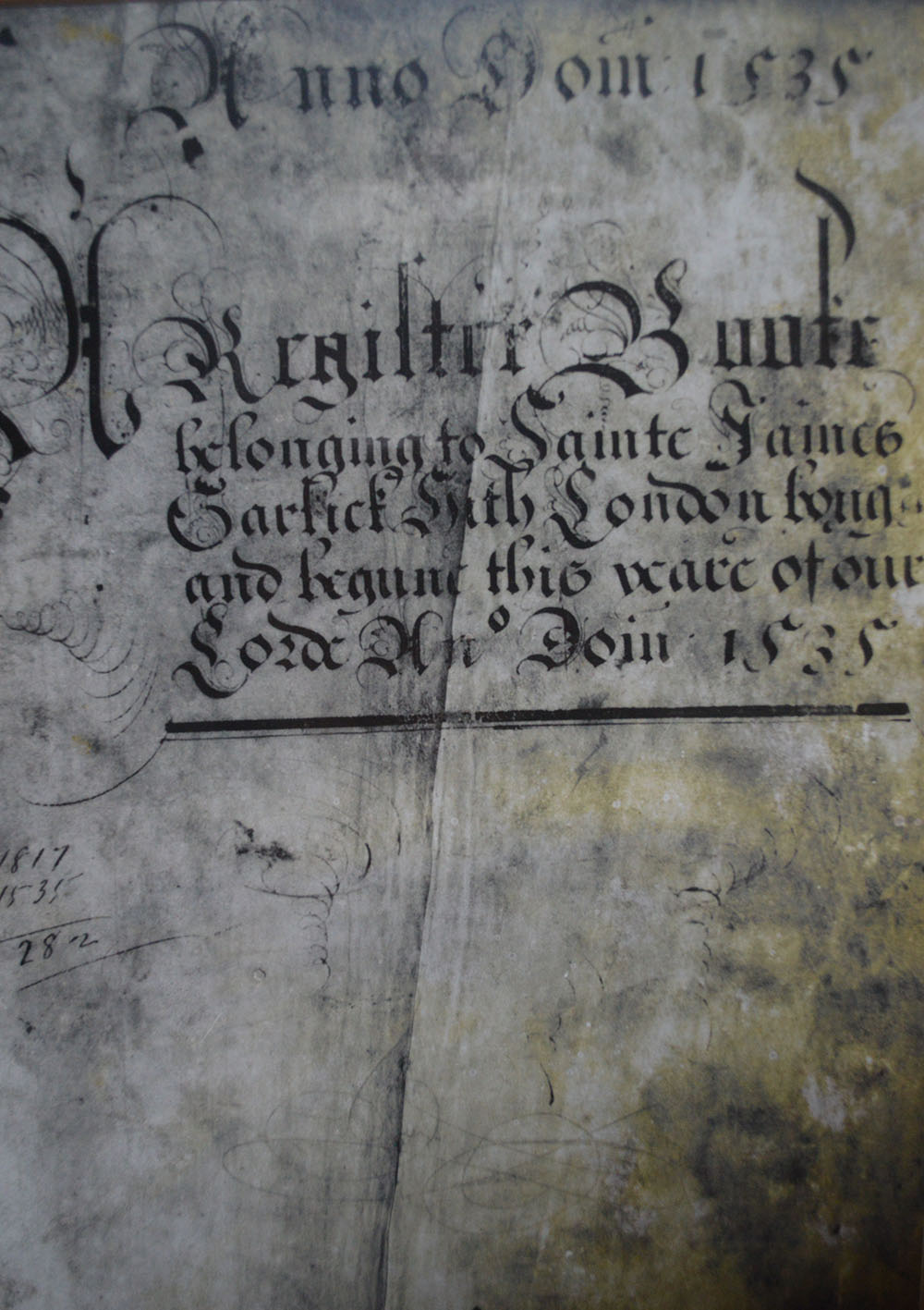 Title page of the 1535 baptism register: the oldest in England

During the Great War, a bomb dropped by a Zeppelin narrowly missed the church, which also suffered less than most City churches during World War II.

Volunteers would kick incendiary bombs off the roof, and put out small fires. But a 500lb bomb did land on the church, burying itself in the south-east corner, but not exploding.

The Blitz also saw the end of the heavy Victorian stained glass. They were all blown out (which some might consider a blessing) though some shards can still be seen in the north and south rose windows. The tower clock, with its figure of St James, was also destroyed in a bombing raid on 11th January 1941. It was restored in 1988, largely through the generosity of the Vintners' Livery Company.

In 1954 minor repairs led to the discovery of death-watch beetle in the roof timbers, and the Church was closed until 1963. Its restoration was said by Sir John Betjeman to the finest of any of the Wren churches.

The latest bizarre episode in the survival story of St James happened in 1991.

A crane on Upper Thames Street, being used to build the new Vintners’ Place offices, toppled over and fell through the north wall. The roof and window were destroyed, the chandelier was smashed into smithereens, and the pews reduced to matchwood. No-one was killed in the accident, and the crane driver, Joe McGrath, leaped clear and only suffered a broken ankle!

As one report from the time put it, St James ‘broke the crane’s fall’, causing an estimated £2m in damages.

If you wish to know more about our history, please email our parish historian, Ellis Pike, via adminSJG@london.anglican.org. 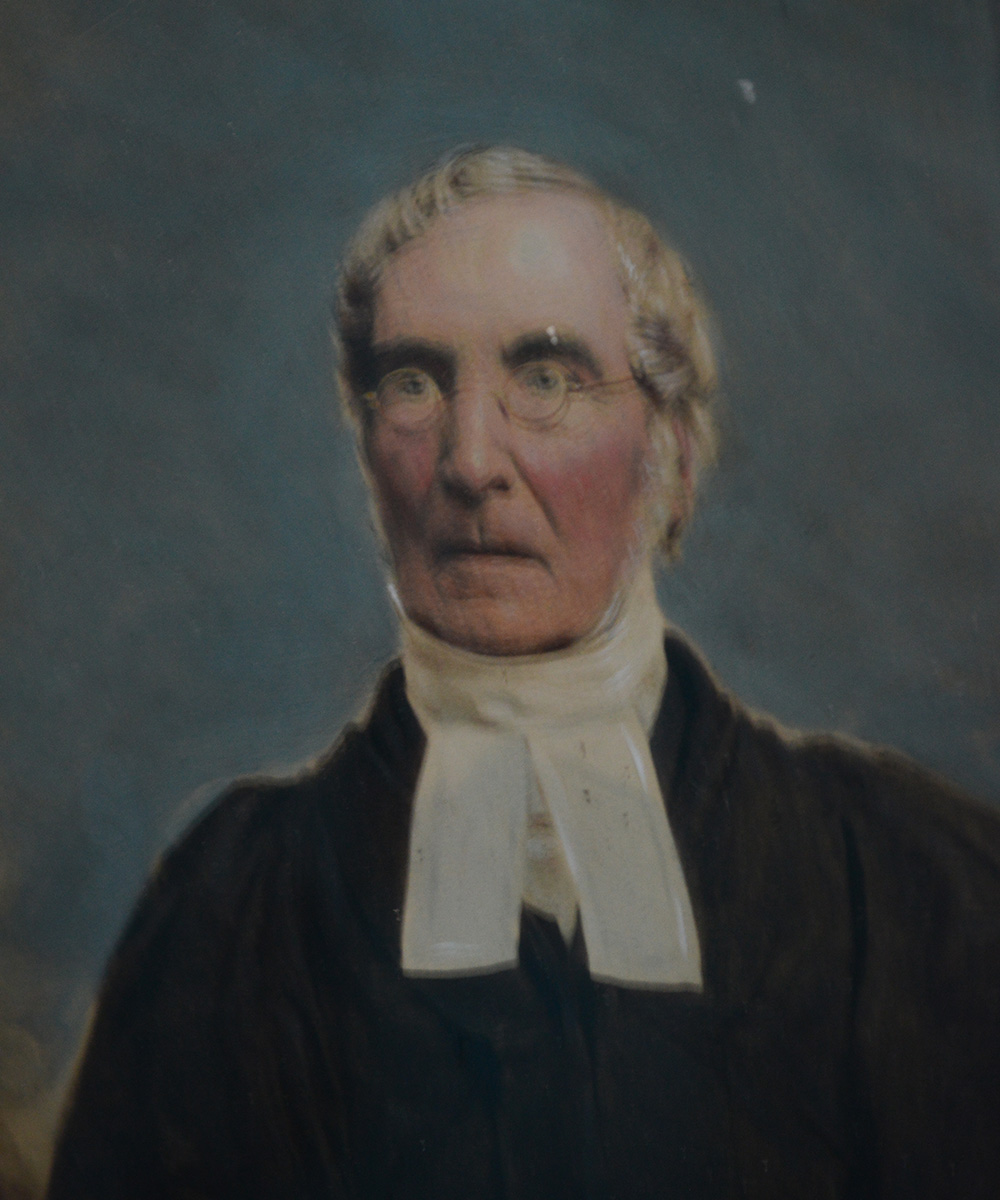 There have been a few notable incumbents in the parish.

In 1532 John Rogers received the living of Holy Trinity the Less, now the site of Mansion House tube station. Two years later he became chaplain to the English merchants in Antwerp, met William Tyndal, and was converted to the Protestant cause.

He returned to London in the reign of Edward VI but was arrested during the reign of Queen Mary for preaching against the Pope.

He was sentenced to death and burned at the stake at Smithfield on February 4th, 1555. A commemoration stone still exists at St Barts hospital to remember the Protestant martyrs who died there.

Another notable reverend rebel was Robert Freeman. He became Rector in 1642, but in 1647, during the Commonwealth, he was ejected from the living for continuing to use the Book of Common Prayer. The parish continued to pay him a pension until the Restoration restored both him and the Prayer Book. He remained in post until 1656. 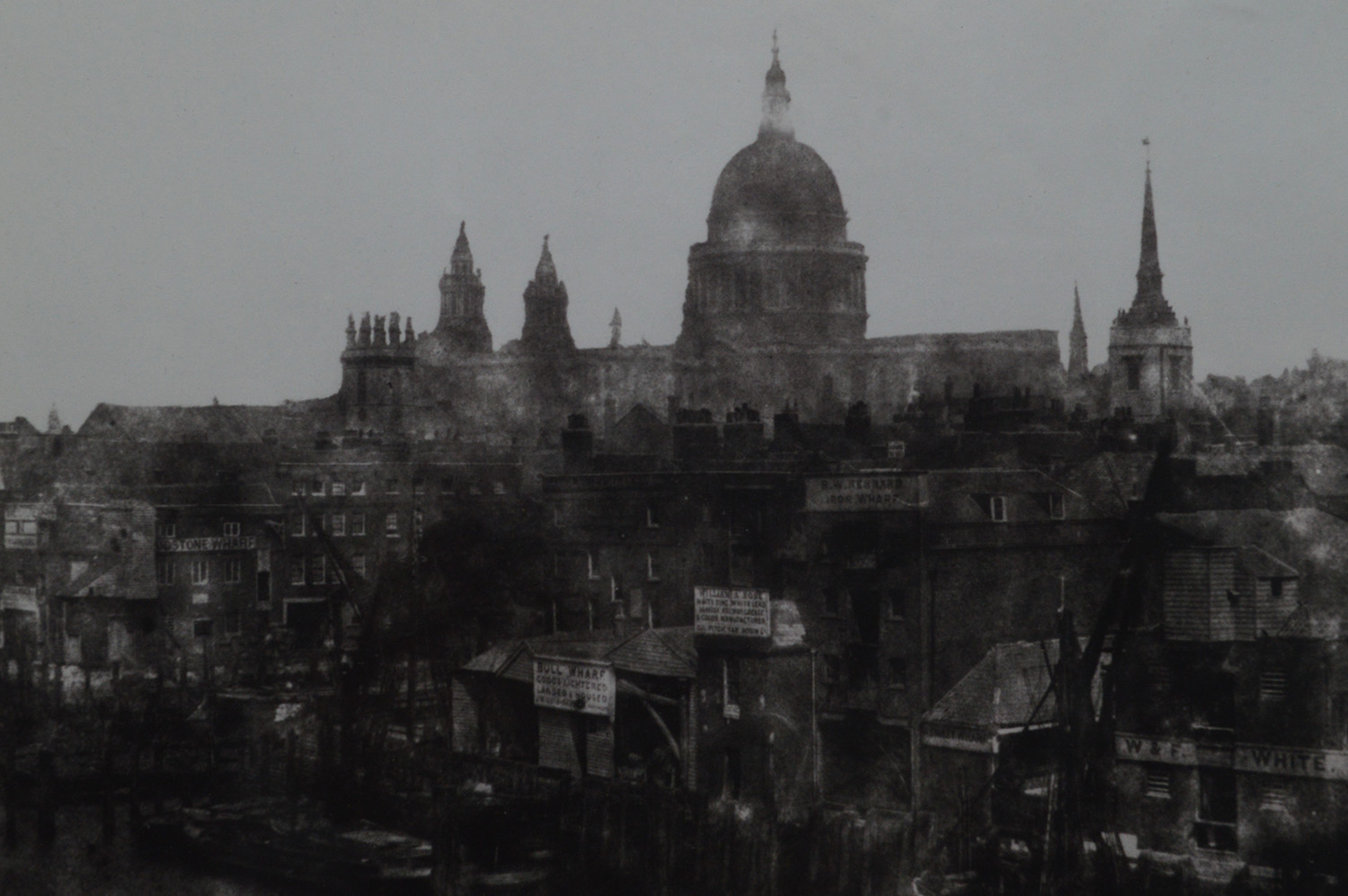 A view of the parish from the South Bank in a photograph dated 1850-52: this is a view that would have been familiar to Charles Dickens 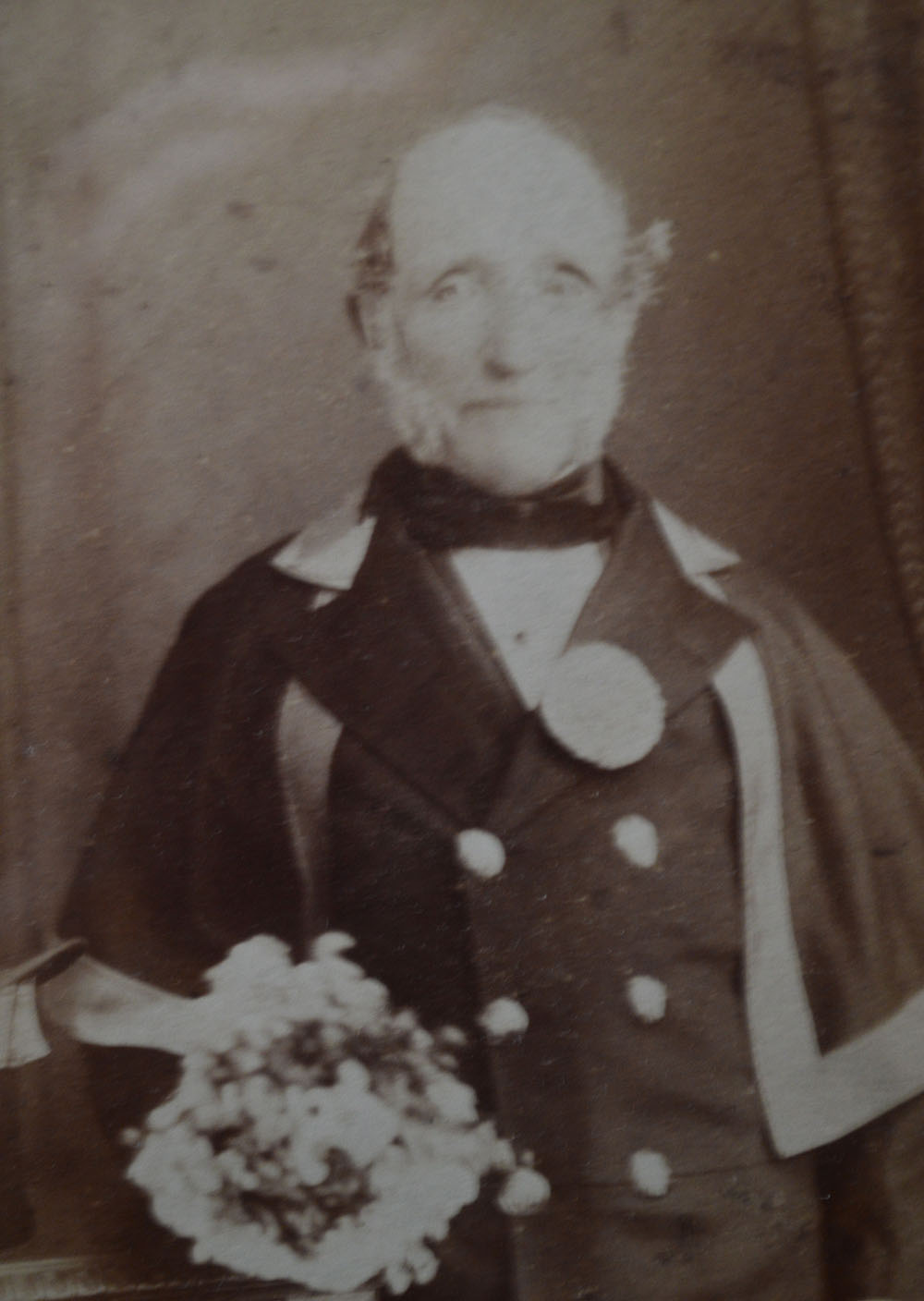 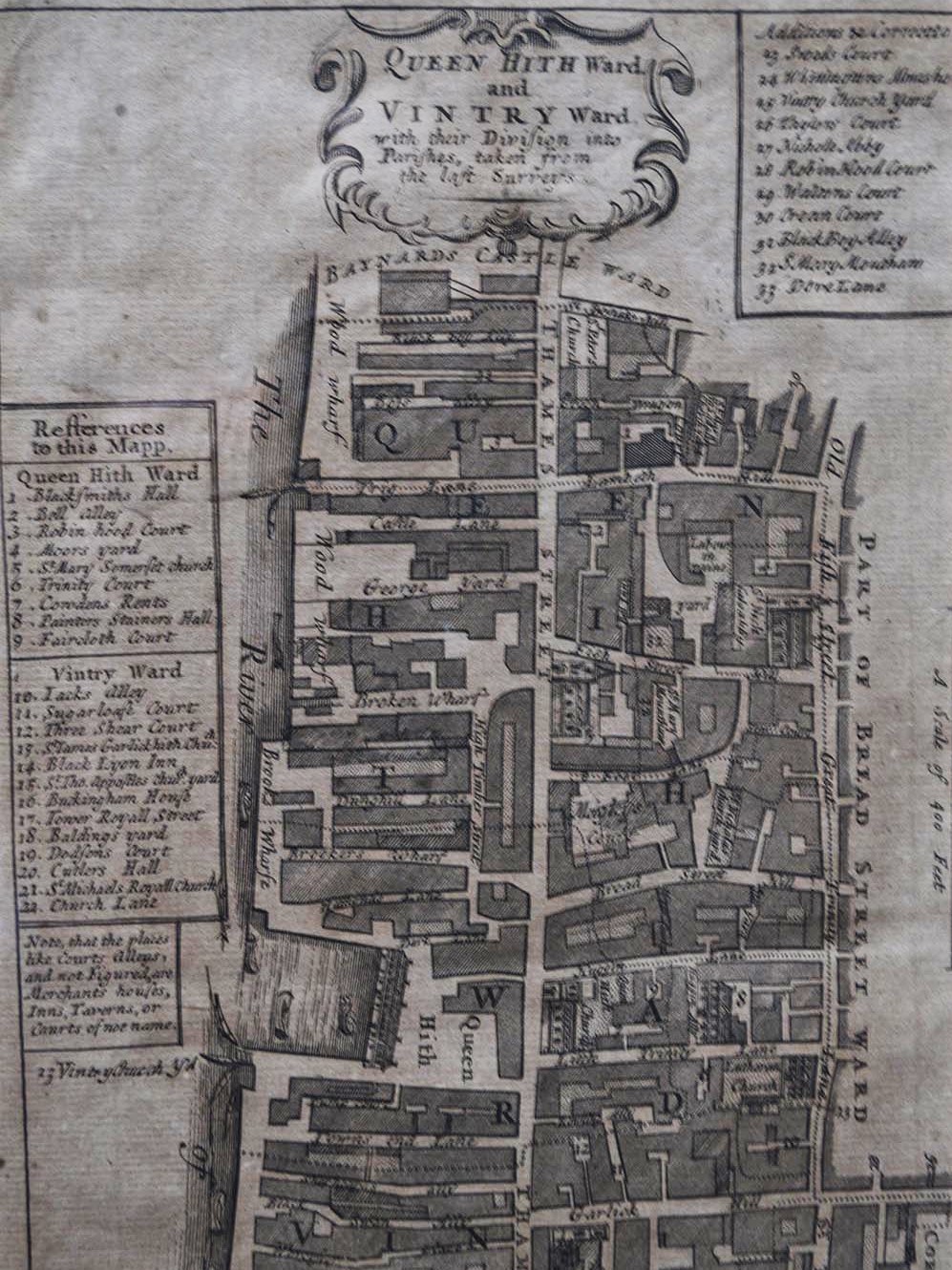 The political map of the parish from 1754: the wards of Vintry and Queenhithe 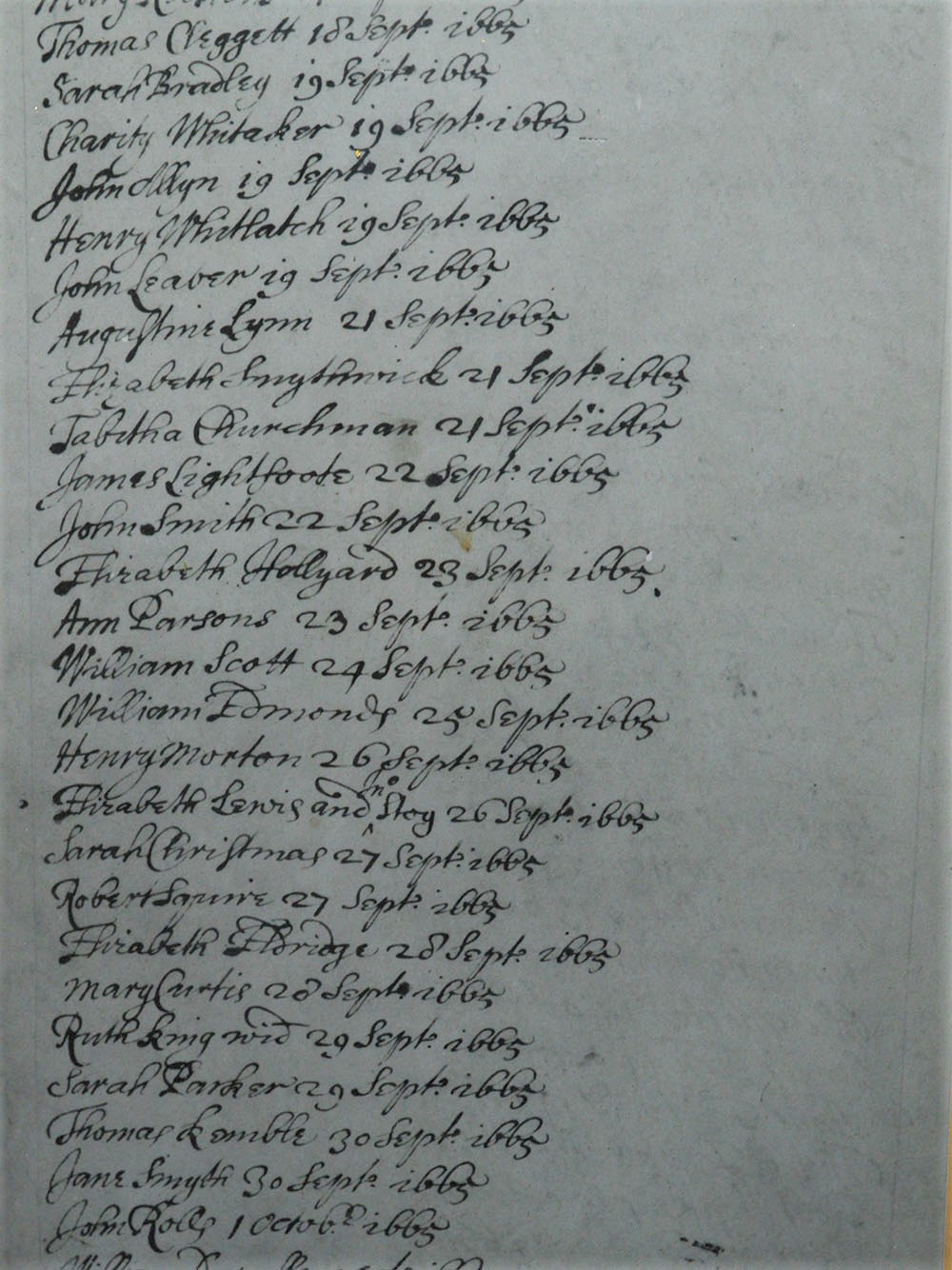 An entry in the 1535 Baptism Register of St James: the oldest in England 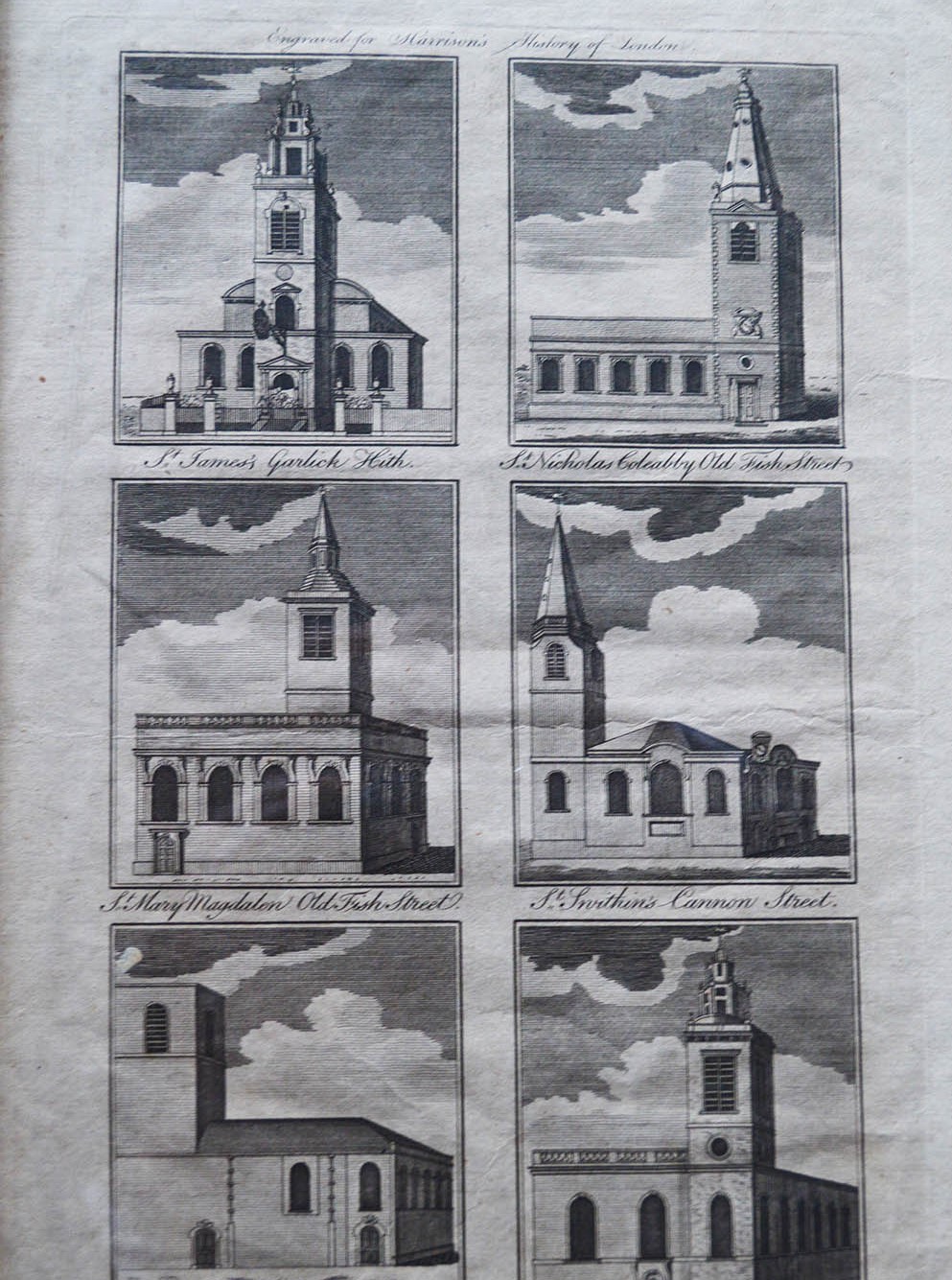 Read more about our 'Wren's Lantern':